It was a jam-packed Well Done Assembly today with special mentions and celebrations throughout. Abbie in Rowling class received her Bronze Music Medal for her skills on the keyboard. Brook from Blackman class shared all of his swimming medals with us, which he’s recently won with the Wyre Forest Swimming Club. He was also presented with a trophy for coming second in his age category at the W. W. S. C. Club Championships. Our Year 5 Police Cadets were announced this week and have already started their training - well done to everybody who applied for the positions.
Wilson class to continue to smash Spelling Shed while Morpurgo class were this week’s AR class of the week. Severn led the way with this week’s housepoints and they’re now leading the yearly chart too! 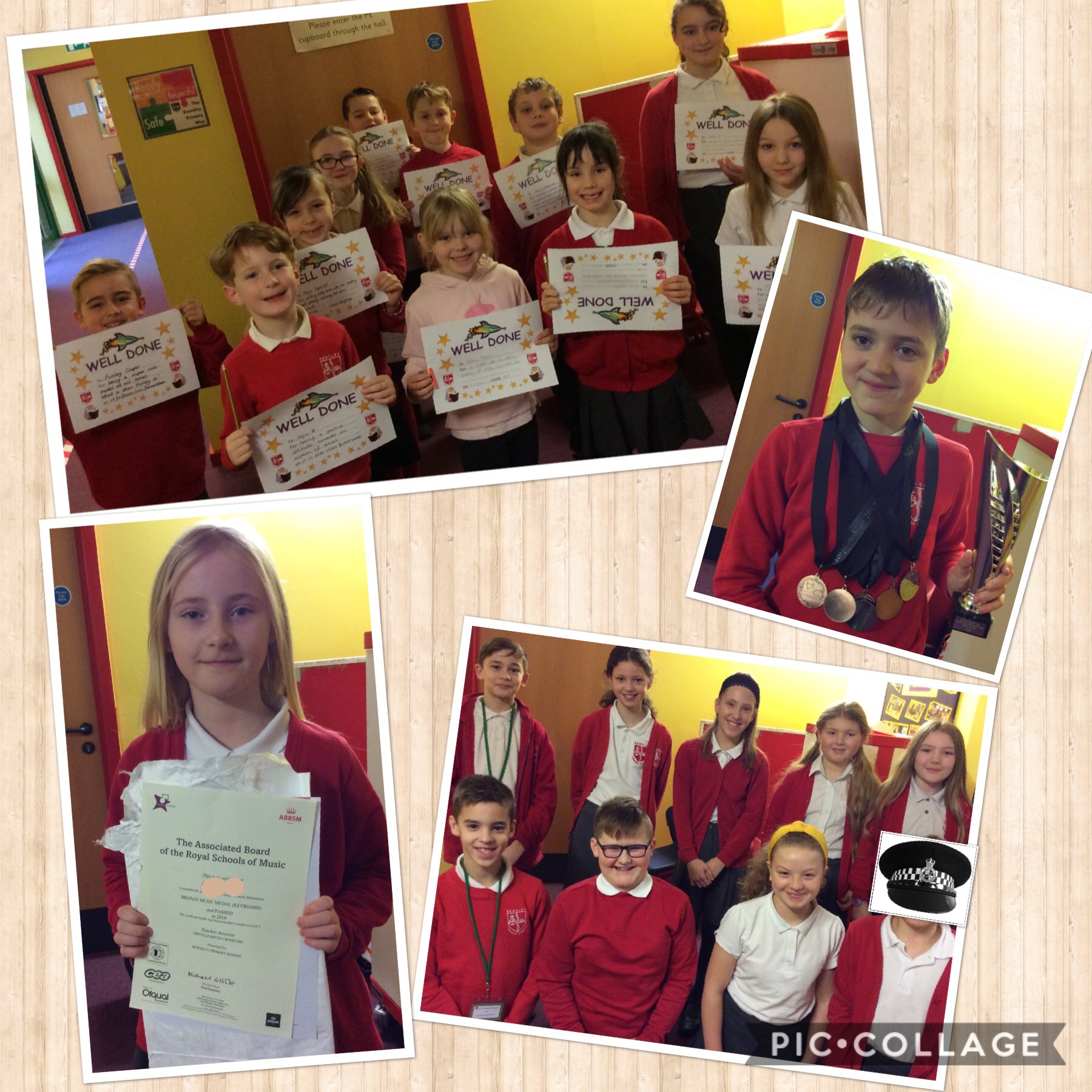 Another great week with our Times Table championship this week with some new faces sharing their success. Well done to Riley from Bond, James from Morpurgo and Evie from Blackman who will all take a space on Winners Row! For next week’s competition, Years 1&2 will be continuing with the 2s, Years 3&4 will remain with the 8s and Years 5&6 are still with the 12s.​ 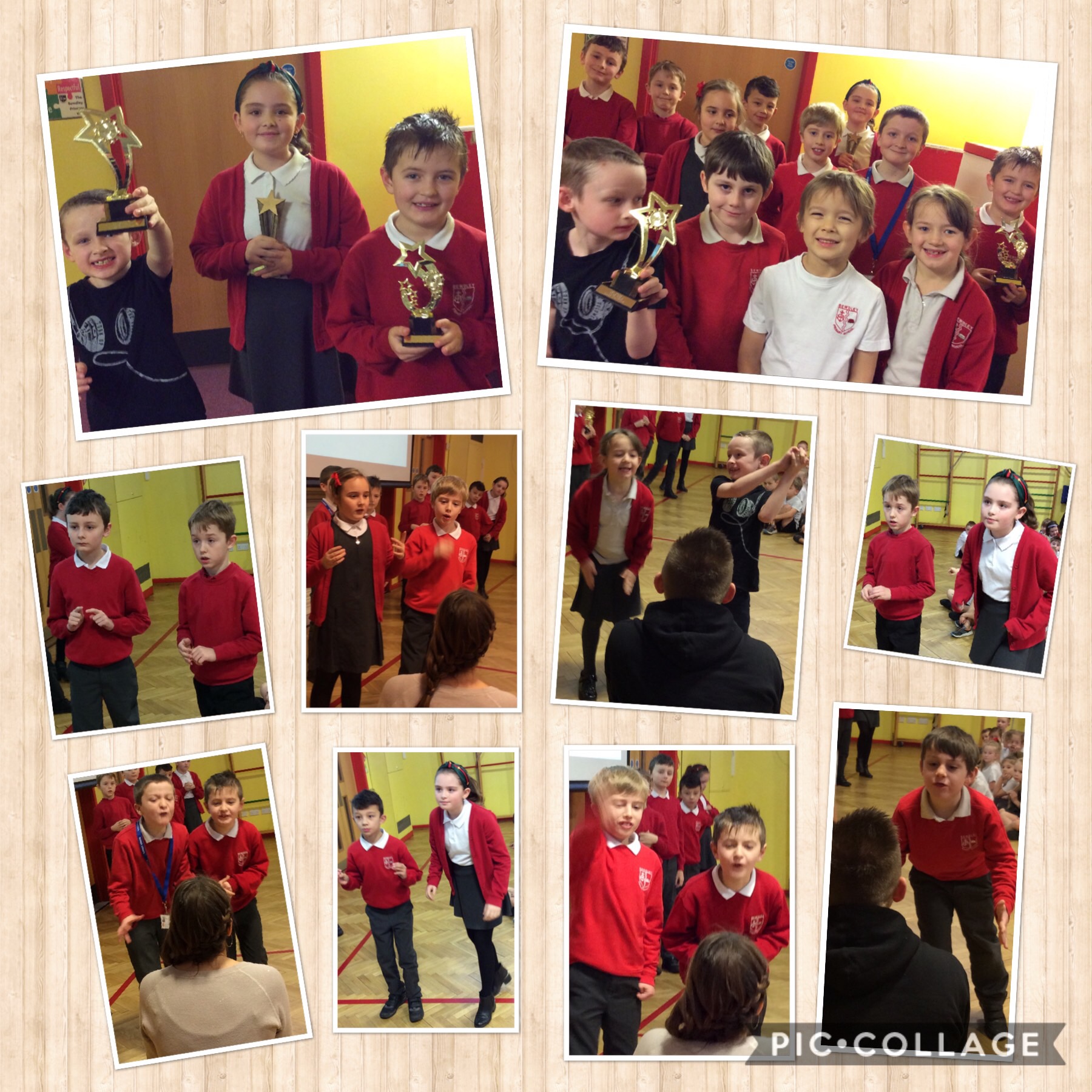 We had some outstanding Well Done Awards this week, with many being linked to the work we’ve been doing linked to climate change and the environment. It was also great to hear about all of the positive attitudes that have been noticed throughout the school too! Seb from Blyton passed his Bronze Music Medal with excellence and Daisy from Wilson completed Book 1 Piano in just one term! Karrie and Ryan, who are also in Wilson, were both awarded their Copper Music Medal today. 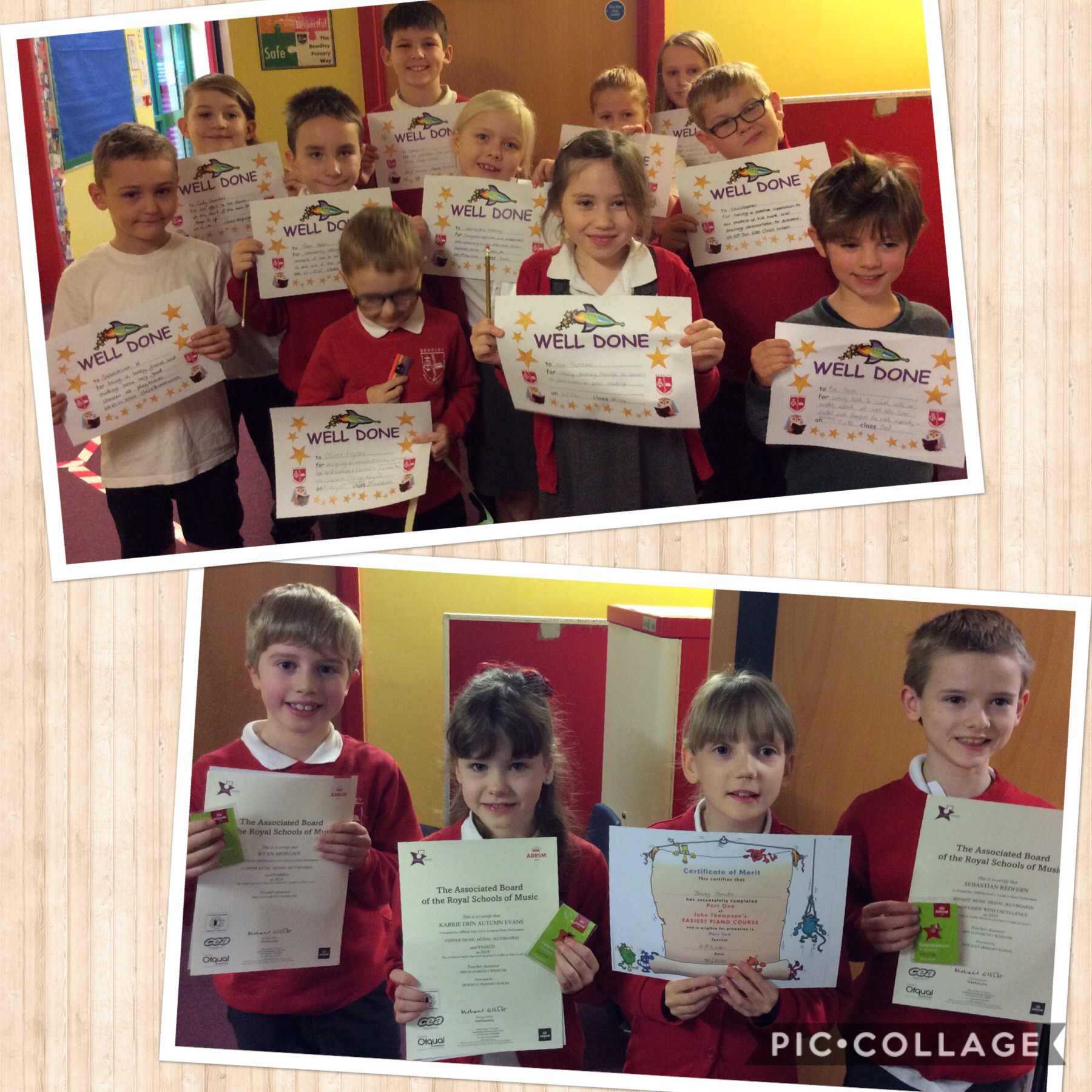 Our first Times Table Champions of 2020 are Riley, Reuben and Archie but the competition is getting so close every single time. Well done to all of our class champions who took part today. Next week, KS1 will be carrying on with the 2s, LKS2 are working on their 8s and UKS2 will still be practising the 12s! 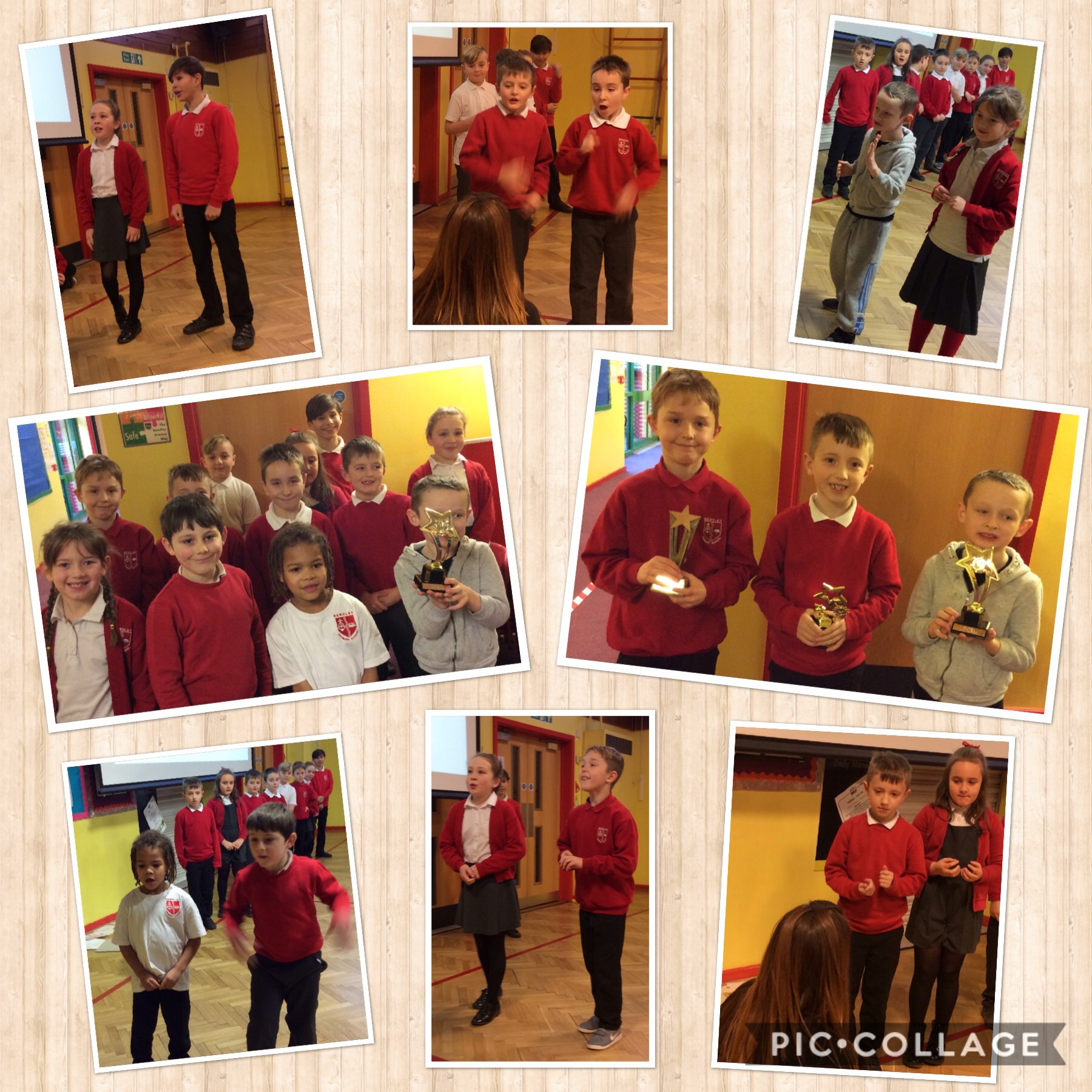 The major theme running through our Well Done awards this week was our fabulous Christmas productions. So many of our pupils were commended for their enthusiasm and dedication. Earlier in the week we also announced the winners of our Eco competition to encourage people to not drop litter. Congratulations to Josh, Willow and Maya who all won litter pickers! All of the finalists' posters can be seen on display in the magic corridor. 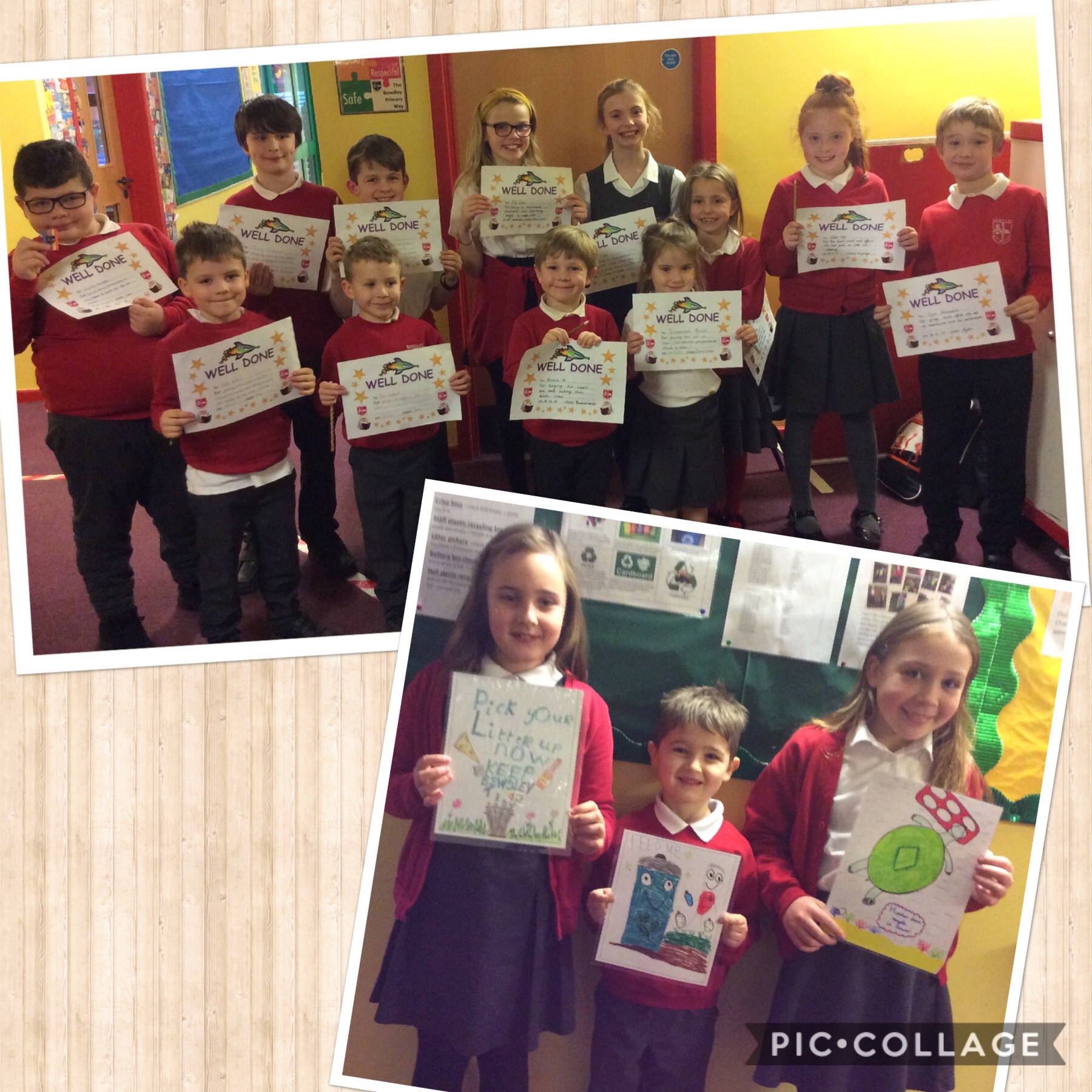 Our Well Done awards today were many and varied with lots of children receiving awards for their improved writing and desire to go above and beyond. Our maths championship is getting so competitive now, as you can see from the photos! Congratulations to Poppy, Phoebe and Leo who will represent their classes on Winners Row. Earlier in the week, we were lucky enough to have a performance from Seb on his keyboard playing Supercalifragilisticexpialidocious which was fabulous! Wyre continued with their winning ways and won both the housepoint and AR house challenges this week. Wilson appear unbeatable in the Spelling Shed competition while Milne were AR class winners for the second week in a row. 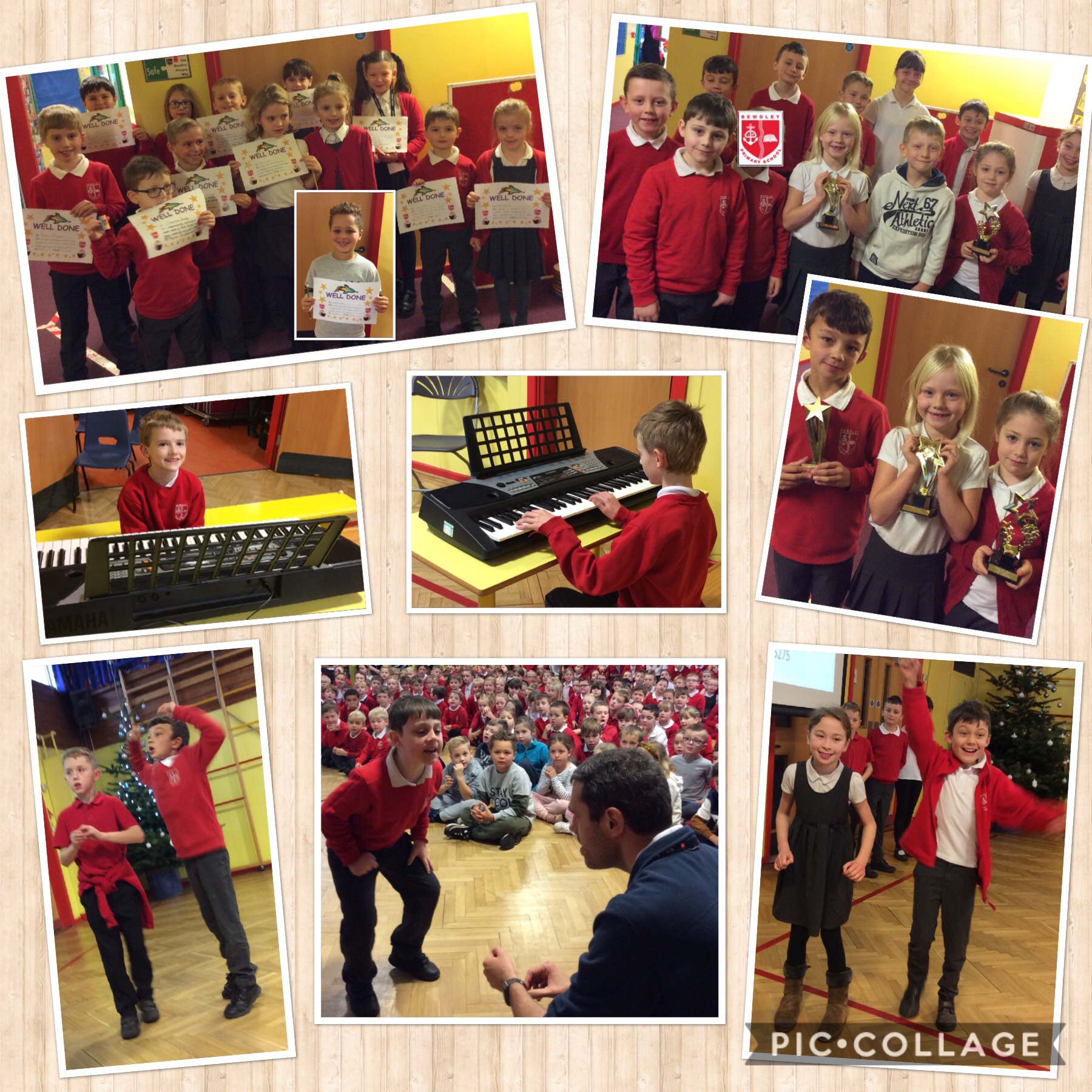 Congratulations to this week's Well Done Award winners! We had so many children being acknowledged for their fabulous attitude to work and for going above and beyond in a variety of different areas. Well done to all of this week's Times Table Class Champions and to our new Key Stage Champions who will take their place on Winners Row. We also congratulated Finley on being Swimmer of the Month at his swimming club. Wyre are certainly the house to beat at the moment as they are currently leading the weekly housepoints, the yearly housepoints and the AR house of the week! For the fifth week in a row, Wilson class have been our Spelling Shed winners and Milne class came top in Accelerated Reader quizzes. 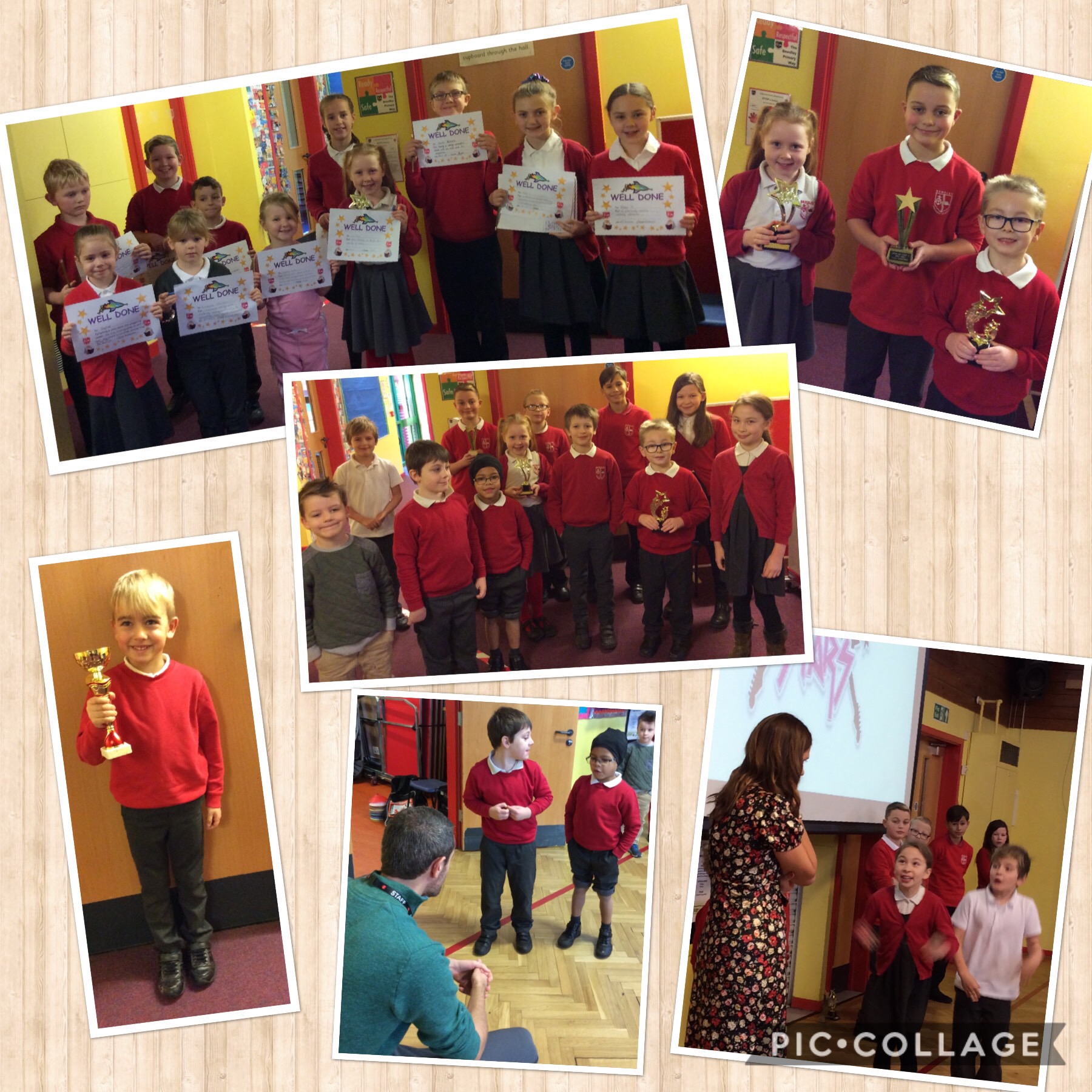 Lots of our Well Done Award winners this week were chosen for their improved confidence and willingness to have a go at anything! Year Six were given a Special Mention for the way they conducted themselves whilst out Geocaching yesterday. In our second week of the  Times Table Championship, we had some returning Class Champions as well as some new faces. Congratulations to Jack, Josh and Oliver who are this week’s Key Stage Champions. Severn earned the most amount of house points this week although Blackstone are still leading overall. Wilson won our Spelling Shed class of the week (for the fourth week in a row!) and Blackman were our AR class of the week! 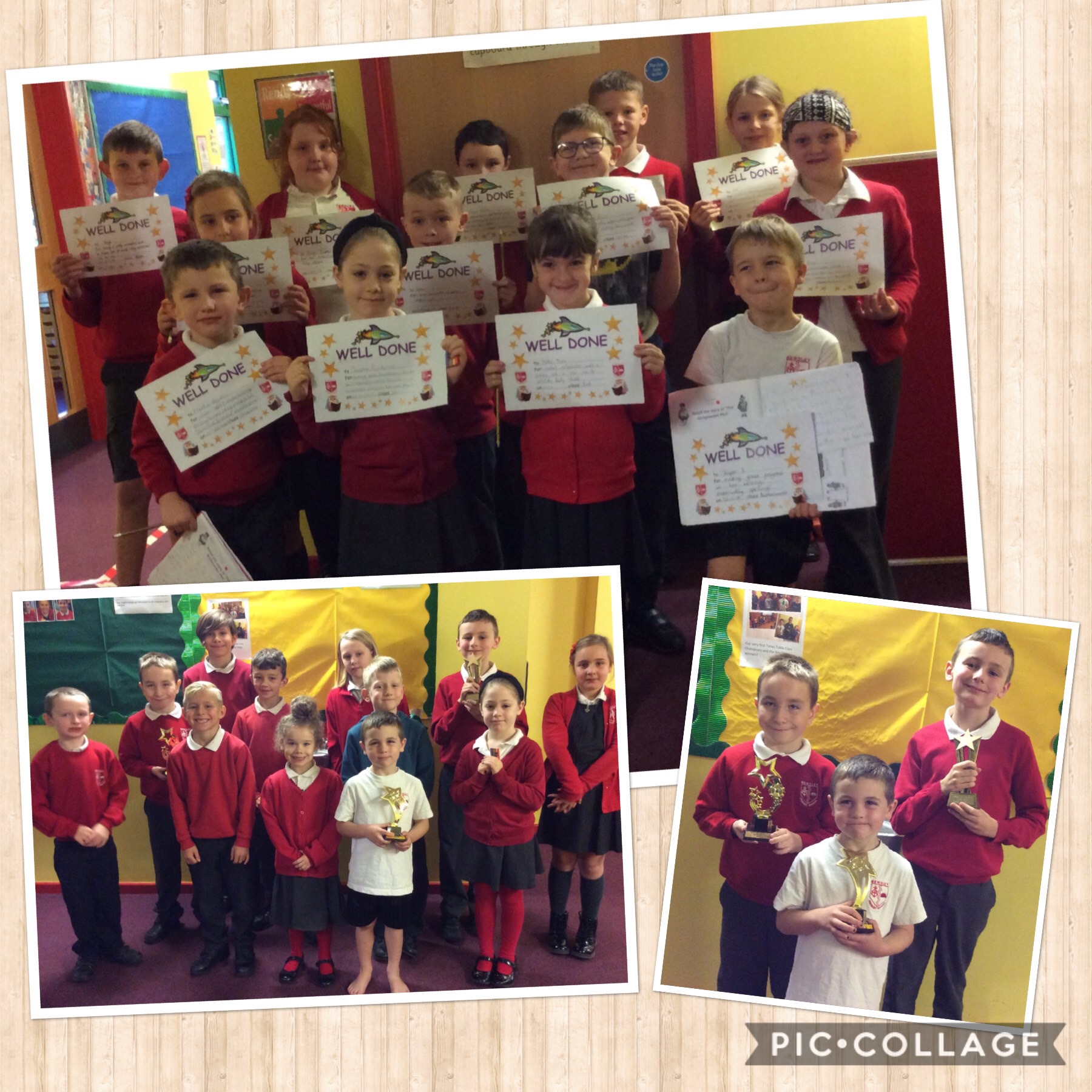 We celebrated our postponed Well Done Awards today with many children being highlighted for the additional work they’re choosing to do at home and the great impact that’s having on their school work. We also had many commendations linked to our new Times Table Championship and the enthusiasm and hard work that’s being seen across the school. Julia helped us to count this week’s winners in Polish whilst Caitlyn shared her many gymnastics medals from her recent competition and told us all of the different skills she had to demonstrate to win them! Well done to everyone who bought donations in on Friday for Children in Need, we managed to raise almost £670. 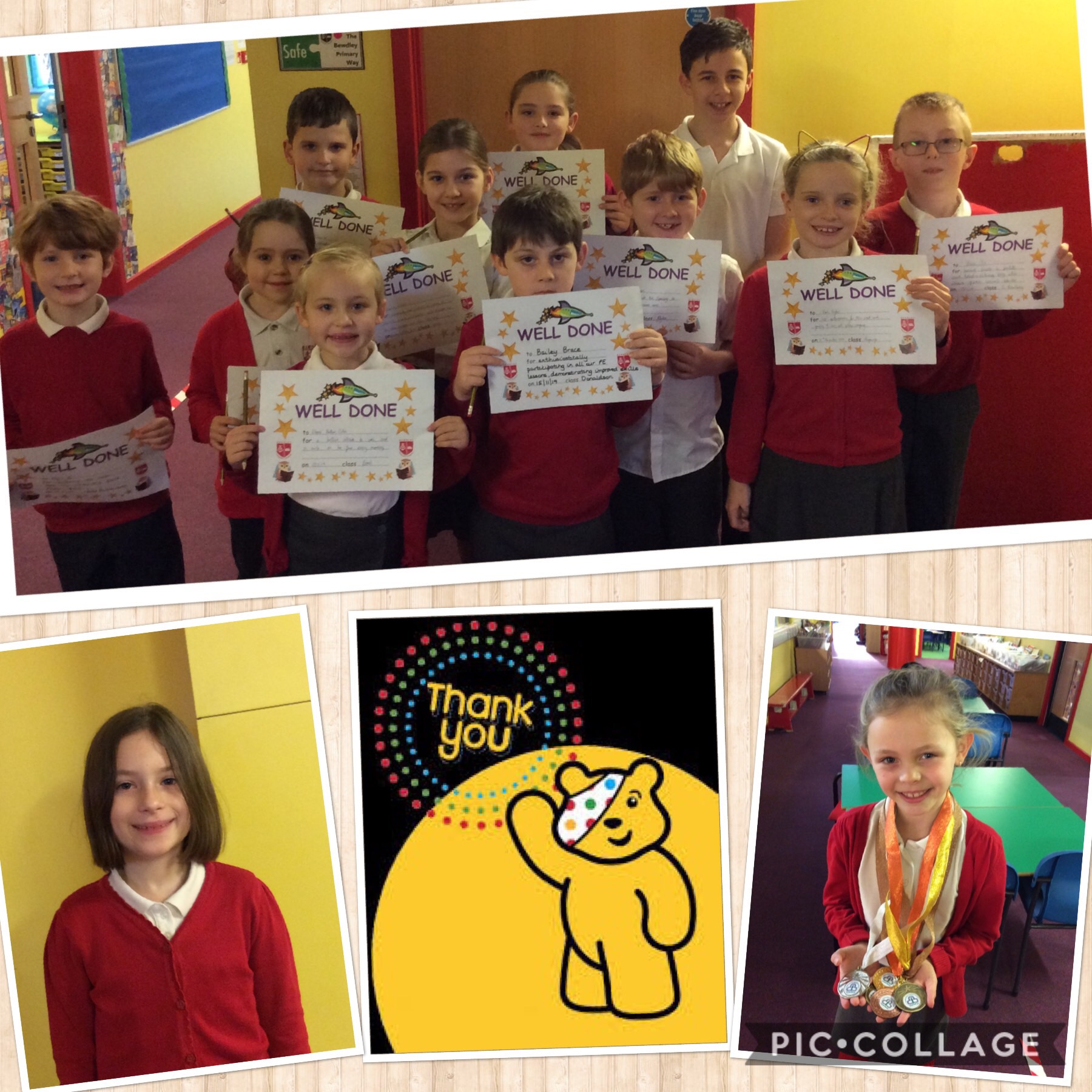 Unsurprisingly, all of our Well Done Awards this week were along the theme of aspiration, determination and positive attitudes. Many of our winners shared their own aspirations, including a Blue Peter presenter, a dentist, a pilot refuse and Prime Minister! We were also treated to a performance from choir of ‘When I Grow Up’ from the musical Matilda. The full video can now be seen on our Facebook page.
Wilson class was our top Spelling Shed class again and Wyre topped the weekly housepoint table for the second week in a row and are now only 7 points behind Blackstone in the overall housepoint total for the year! 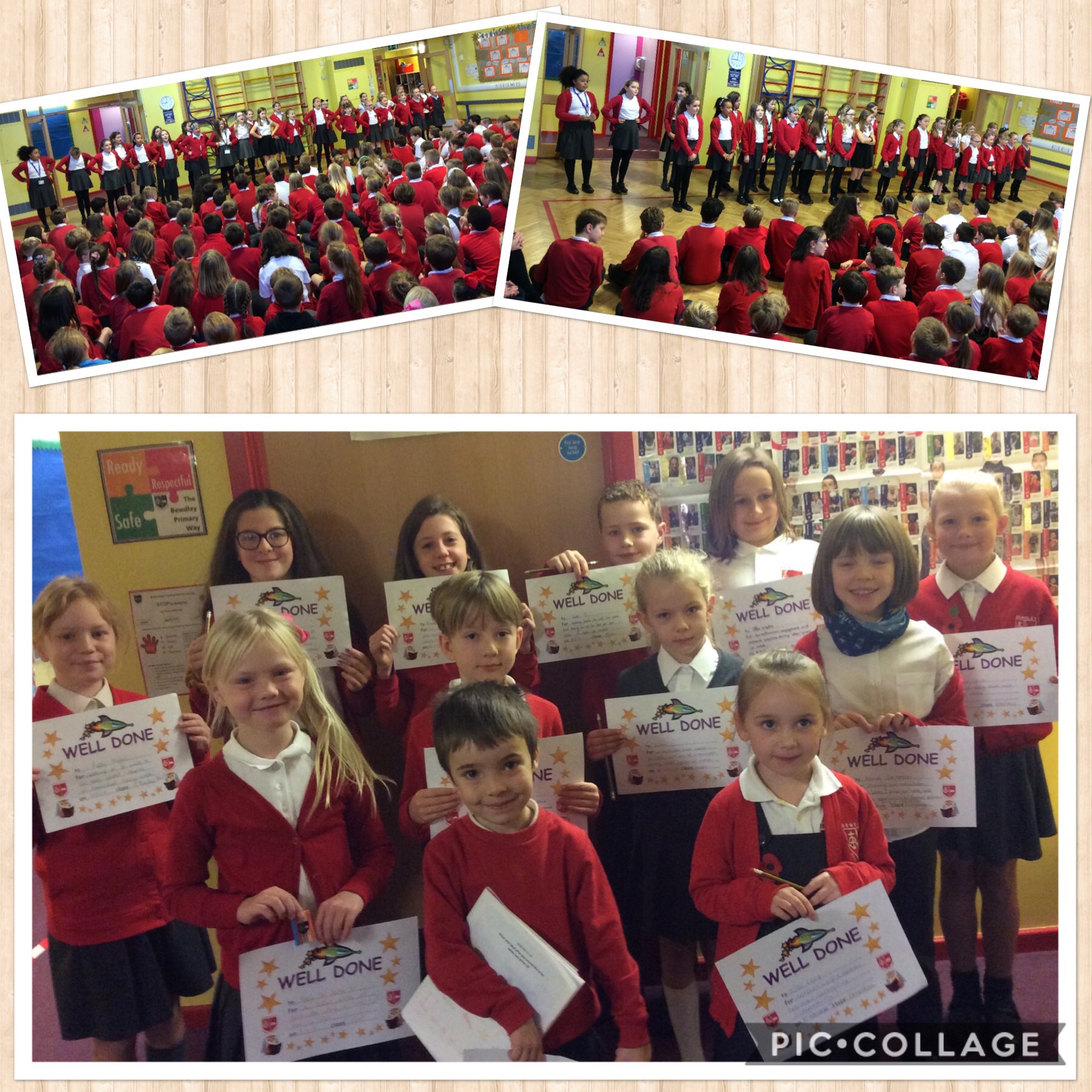